What is Surveillance Testing?

Surveillance testing is practical for any business looking to reduce the threat of an outbreak. Essential businesses that require on-site workers, such as meat packing plants and manufacturing sites have incorporated surveillance testing into their COVID mitigation plans to enable routine operations to continue safely. Nursing homes are using surveillance testing to detect infection early to protect high-risk groups, who are more prone to transmission and severe illness.

Surveillance testing can be used to:

Rapid antigen tests, which have some uses in diagnostic testing, are not beneficial in surveillance due to their low sensitivity and specificity. Their low specificity makes them prone to a high false positive rate, especially in low prevalence populations. A typical rapid antigen test has 98% specificity, lower than that of PCR tests, resulting in false positive rates as high as 70%. As disease prevalence decreases, it becomes more difficult for rapid antigen tests to accurately identify an active infection. False positives have significant implications for any business, leading to halting on-site operations, unnecessary employee stress, or inappropriate decisions related to isolation and care.

Rapid antigen tests also have a 20% false negative rate, meaning they miss 1 out of 5 active COVID infections Due to their low sensitivity, the FDA recommends confirming negative results from a rapid antigen test with a PCR test. Antigen tests look for proteins on the virus’s surface and require thousands to tens of thousands of viral particles to be able to detect an infection

The most effective surveillance testing technology is highly sensitive, to enable early detection of infection, and highly specific, to provide accurate results in low prevalence populations. RT-qPCR has the best performance of any detection method in both categories, setting the gold standard of detection. By making exponential copies of the virus’s exact genetic material, RT-qPCR can detect minute amounts of viral particles, less than 100 copies of viral RNA/µL.

A strategic testing plan accounts for the level of COVID risk within the groups tested, depending on the amount of interaction outside of the group and the potential for severe illness.

Researchers modeled testing frequency and turnaround time against reduction of viral transmission within a hypothetical population. Decrease in transmission rates were quantified as removal of “infectiousness” from the overall population, which dropped significantly as asymptomatic individuals were detected early and then self-isolated with the appropriate surveillance testing scheme.

In higher risk groups, such as the hospitality industry where individuals interact with the general public randomly, testing frequency should be increased to account for uncontrolled encounters. High risk groups can also include older adults or those with underlying medical conditions who are more likely to get fatally sick. In a lower risk group, such as learning pods where individuals tested have had limited exposure to others outside of the particular group, fewer tests will be needed to support ongoing activities.

Ease-of-collection and minimizing operational disruption are important when selecting the sample type for routine surveillance testing. Saliva is the ideal specimen as it can be reliably self-collected due to the straightforward and simple procedure, eliminating the need to hire and train on-site health personnel. 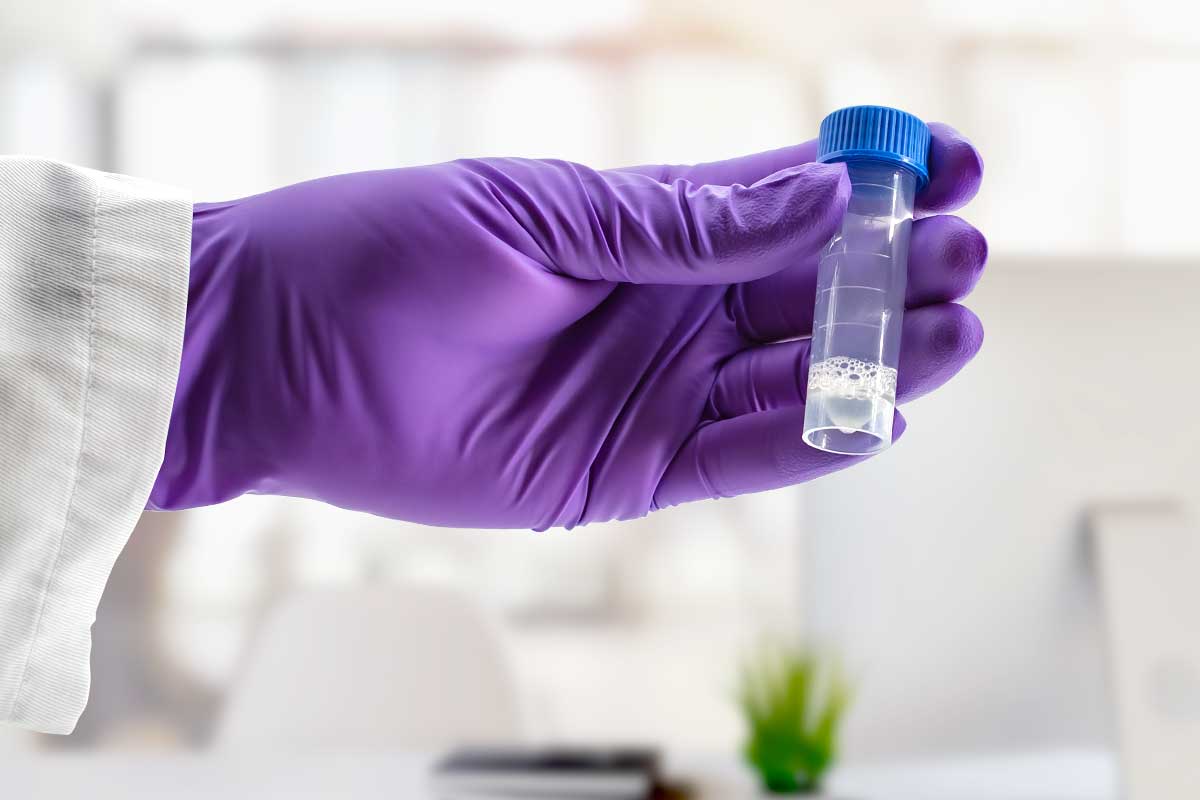 In addition, it is minimally invasive, increasing compliance among staff for repeated testing. Compared to nasopharyngeal swabs, saliva samples can detect pre-symptomatic infections earlier because they carry a larger viral load throughout the course of infection.

Surveillance testing can be conducted in diverse group sizes as large as an entire manufacturing plant to smaller ones, such as an office team. Pooled testing allows for flexibility in the numbers of people tested which can reduce costs significantly and increase testing capacities. Individual diagnostic tests for SARS-CoV-2 can cost anywhere from $150 – $200, which is not a feasible or affordable solution for many businesses. Surveillance testing allows for pooling, and pooling even five individuals drops the average cost per test to $30 – 40.

Diagnostic testing can cost anywhere from $150‑200. Pooling even five individuals drops the cost per test to $30‑40.

How to Pool Strategically

The optimal pooling strategy minimizes cost and disruption by identifying groups depending on the level of their interactions with one another. Pooling should follow the group format that already exists in current business operations so actionable results can be taken without affecting other teams in the case of a positive result. Examples of natural groups include work shifts, classroom cohorts, or hospital departments.

Pool size is also an important strategic consideration as pooling too many samples across an organization can make it difficult to take action if a positive result is obtained, without significant impact on overall business operations. If pools are too small, testing and cost efficiencies are negligible.

In addition, as more people are pooled together, test sensitivity decreases due to specimen dilution. However, the loss in test sensitivity can be remedied with replicate testing where the same pool is run more than once to confirm results.

For example, if a manufacturing plant wanted to resume operations safely, they could first take a look at the natural groups that exist within their operations, such as those within particular shifts or work near one another. 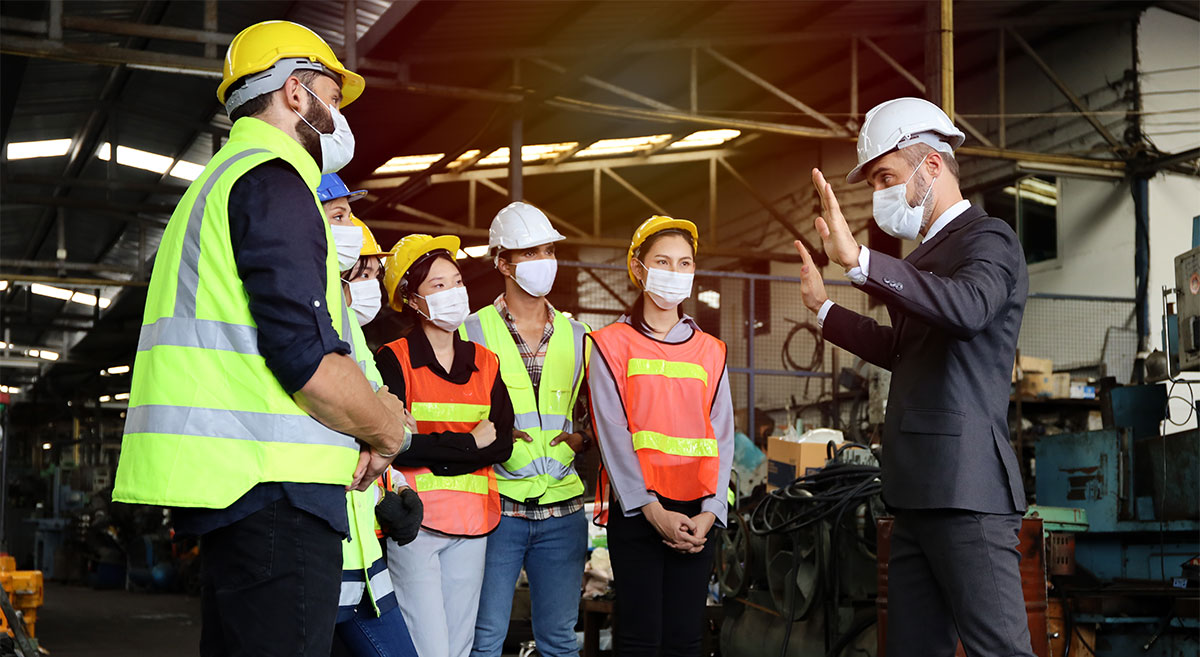 The next step would be thinking through the consequences of a positive pooled result and the implications. If the morning shift production line was pooled, and a positive result returned, the entire production line would be required to go home and self-isolate, impacting overall business operations. However, if the shift were split into two pools, and a positive result returned, only one group would be required to go home, while the other group could continue working.

Under the FDA and CMS, surveillance testing can be performed outside and within traditional CLIA laboratories as long as individual results are not returned to the tested population. In the case of a positive result, as long as the facility does not report actual test results, individuals can be referred for diagnostic testing. Samples can either be de-identified or pooled to stay within regulatory guidelines.

When pooling samples, a positive result can be followed up with individual diagnostic testing to determine who the infected individual(s) is. If a negative pooled test result is obtained, all individuals in the pool are presumed to be coronavirus-free at the time of testing.

This flexibility in settings where surveillance testing can be implemented means that it can be used as a tool across various industries. This is critical as diagnostic labs are overwhelmed by the influx of COVID tests requiring processing, leading to backlogs and days spent waiting for results. By moving testing outside of the traditional lab environment, turnaround times and lab costs are reduced significantly.

While both surveillance and diagnostic testing detects the occurrence of infection, both have differing purposes.

Get Started with Surveillance Testing Today

Starting surveillance testing can be intimidating. Our saliva-based, RT-qPCR solution simplifies complicated laboratory workflows into a few steps and gives you on-site results in under two hours. We’ve helped various businesses, from essential manufacturing facilities to preschools, implement and utilize surveillance testing to protect at-risk and staff groups and regain control over the pandemic. 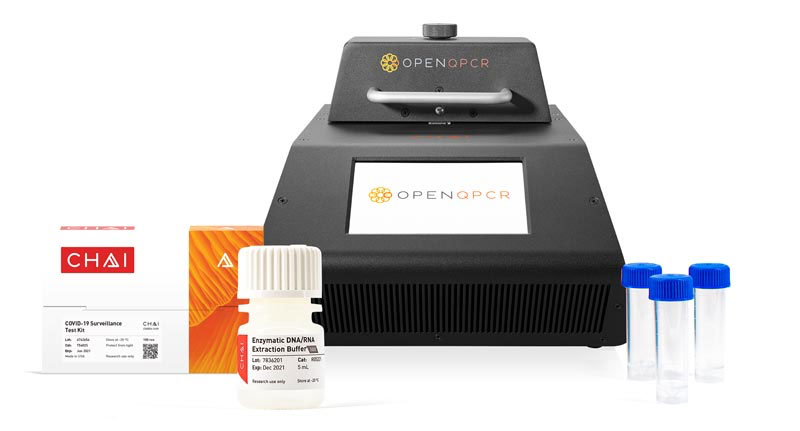 The COVID-19 Surveillance Test Kit incorporates a pooling step, which allows use outside of CLIA labs and healthcare settings, and can detect an infection in as little as 5.8 viral copies/µL. Our UNG carry-over prevention system minimizes false positives by reducing carryover contamination.

The Open qPCR automates test results and analysis, displaying clear, actionable results and is a fraction of the cost of traditional PCR machines. The Surveillance Quick Start Bundle contains everything you need to begin testing your facility for Coronavirus today.

Note: The Surveillance Test Kit has been fully validated and uses the same RT-qPCR technology as diagnostic testing.

Thank you for your message
We'll get back to you as soon as possible.

Choose up to two products to sample.